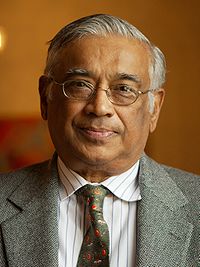 The citation accompanying the award reads in part: “[Professor Varadhan is honored for] his work in probability theory, especially his work on large deviations from expected random behavior, which has revolutionized this field of study during the second half of the twentieth century and become a cornerstone of both pure and applied probability. The mathematical insights he developed have been applied in diverse fields including quantum field theory, population dynamics, finance, econometrics, and traffic engineering.”

Below is a link to the Press Release by the Courant Institute. For those of you who would like to congratulate Professor Varadhan personally, I also provide his email address.

A sad final observation is that Raghu and his wife Vasu lost their elder son Gopal, age 32, in the terrorist attacks against the United States on September 11, 2001. He was a Managing Director of Cantor Fitzgerald supervising its interest rate derivatives business in the United States. Gopal was trapped in his 105th floor office above the first crashed plane in the North Tower of the World Trade Center. He was one of the 658 employees of Cantor Fitzgerald — all who were working that day in the Tower — lost that day.

*of which I am a member (See
Home page “Academic affiliations.”)