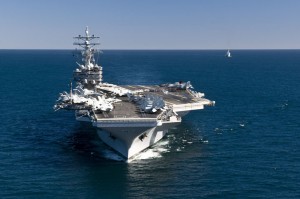 The featured image of this post is of the aircraft carrier U.S.S. Ronald Reagan, CVN 76, powered by dual Westinghouse A4W nuclear reactors, at flank speed on the high Pacific. With her complement of 5480 men and women of the United States Navy she stands ready to defend freedom anywhere and everywhere on the world’s oceans. This is the spirit of America, the defining concept of our nation — freedom.

Many have mused in recent years on the so-called decline of influence of the United States in world affairs. Well, let it be said that we do not believe that ever we need be the best at anything. We are about that concept — freedom — and we let that vaulted idea speak for itself. It remains true that waves of immigrants, the strength behind that idea, continue to flood our shores, far more than to any other nation. And why? Because freedom, be it political, economic, or social, is the most powerful draw on earth.

Let us compare. The Soviet empire is gone, proof positive that an attempt to dominate the spirit of a people — no matter how imposed by force — is doomed to failure. China, a Communist dictatorship, censors every aspect of its peoples’ lives. Ask any Chinese citizen — and that’s stretching a concept — when he last voted for President. A joke, you say? Not really. And then there are the peoples’ paradises of Cuba, North Korea, Myanmar, and Zimbabwe. What more need be said?

So remember, when you contemplate the decline and fall of America, to think of the millions of us — real citizens — who stand ready to die for our freedom, including this author, and you will begin to get the idea. We will never, ever, give up our 235 year experiment for freedom.